Emerging functional materials for applications in photonics, plasmonics, and mechanics can be created by assembling smaller particles into defined structures. Among various assembly strategies, spherical confinement (e.g. in drying emulsion droplets) to guide the self-assembly process is gaining increasing interest. This hierarchical approach allows for the assembly of a finite number of particles into a larger supraparticle. A particularly appealing property of these microscale structures is their structural color arising from the interference of light with their primary building blocks.

In a collaborative study, recently published by Dr. Junwei Wang et al. in Angewandte Chemie (https://doi.org/10.1002/anie.202117455), Silvan Englisch and Dr. Thomas Przybilla from IMN elucidated the internal structure of superparticles assembled from polyhedral metal-organic framework (MOF) primary particles by means of SEM-FIB and high-resolution NanoCT analyses. In the work, the relationship between the structural order of the superparticles and the appearing structural color as a function of various geometric shapes and sizes of the anisotropic MOF-type building blocks is revealed.

Optical properties of MOF supraparticle and their structure.

In particular, an angle-dependent coloration of the MOF-type supraparticles is unraveled, which can be linked to the presence of ordered, onion-like layers at the outermost regions. Surprisingly, even though different shapes of the MOF particles have different propensities to form these onion layers, all supraparticle dispersions show well-visible macroscopic coloration, indicating that local ordering is sufficient to generate interference effects. 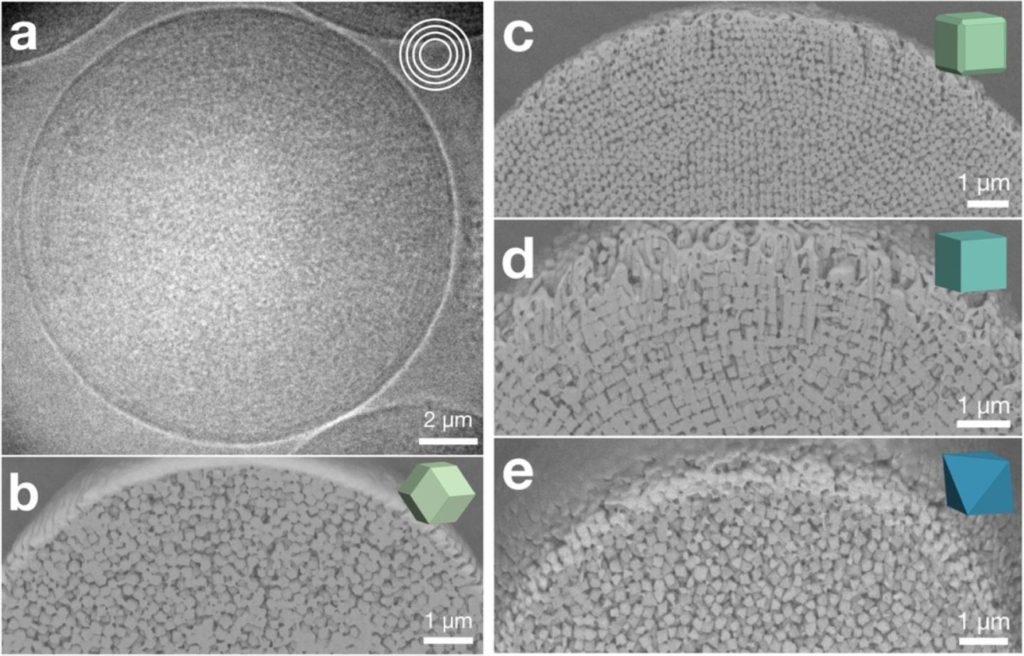 The internal structure of the supraparticles assembled from polyhedral MOFs.